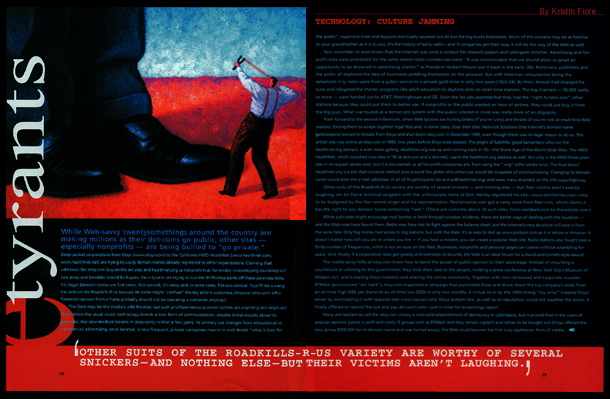 One heartening thing about this piece. The art group etoy seems to be going strong at etoy.com to this day. Huzzah!

While web-savvy 20-somethings around the country are making millions when their dot-coms go public, other sites – especially non-profits – are being bullied to "go private." Deep-pocket corporations from Etoys to California HMO HealthNet are trying to usurp domain names already registered to other organizations. Claiming that addresses like etoy.com (a guerrilla art site) and healthnet.org (a non-profit hub for medics in developing countries) will lure away and bewilder would-be buyers, the e-tyrants are trying to sue the thrift-shop pants off these penniless folks. It's illegal (domain names are first-come, first-served), it's nasty, and in some cases flat-out comical. Toys-'R'-Us is suing the satirical site Roadkills-R-Us because its name might "confuse" the toy seller’s customers. (Anyone who can’t tell a flattened raccoon from a Furby probably should not be operating a computer anyway.)

The Web may be the media’s wild frontier, but such profiteer-versus-pioneer battles are anything but virgin soil: technology breeds a new form of communication; despite initial doubts about its potential, the new medium booms in popularity; within a few years, its primary use changes from educational to commercial; advertising, once banned, is now frequent; private companies muscle in and decide “what is best for the public”; expensive trials and buy-outs eventually squeeze out all but the big-bucks businesses. Much of this scenario may be as familiar to your grandmother as it is to you. It’s the history of early radio – and if companies get their way, it will be the way of the Web as well.

Few remember or even know that the Internet was once a conduit for research papers and cyber-geek chitchat. Advertising and for-profit sites were prohibited for the same reason radio commercials were: “It was inconceivable that we should allow so great an opportunity to be drowned in advertising chatter,” as President J. Edgar Hoover put it back in the early ‘20s. Politicians, publishers and the public all deplored the idea of businesses peddling themselves on the airwaves. But with American consumerism being the behemoth it is, radio went from a public service to a private goldmine in only two years (1922-24). By then, Hoover had changed his tune and relegated the charter programs like adult education to daytime slots on smalltime stations. The big channels – 50,000 watts or more – were handed out to AT&T, Westinghouse and GE. Soon the fat cats asserted that they had the “right to take over” other stations because they could put them to better use. If non-profits or the public wanted an hour of airtime, they could just buy it from the big guys. What was touted as a democratic system with the public interest in mind was really more of an oligopoly.

Flash forward to the millennium, where Web tycoons are hurling bribes (if you’re lucky) and threats (if you’re not) at small-time Web masters – forcing them to scrape together legal fees and, in some cases, close their sites. Network Solutions (the Internet’s domain-name gatekeepers) bowed to threats from Etoys (www.etoys.com) and shut down etoy.com in December 1999 even though there was no legal reason to do so. The artists’ site was online at etoy.com in 1995, two years before Etoys even existed. The plight of Satellife, good Samaritans who run the healthnet.org domain, is even more galling. Healthnet.org was up and running back in ’93 – the Stone Age of the World Wide Web. The HMO HealthNet, which launched two sites in ’96 (www.healthnet.com; www.healthnet.net), wants the healthnet.org address as well. Not only is the HMO three years late in its request (strike one), but it is also barred, as all for-profit companies are, from using the “.org” suffix (strike two). The final blow? Healthnet.org is a site that connects medical pros around the globe who otherwise would be incapable of communicating. Changing its domain name would alter the e-mail addresses of all of its participants (so-and-so@healthnet.org) and leave many stranded on the info-superhighway.

Other suits of the Roadkills-R-Us variety are worthy of several snickers – and nothing else – but their victims aren’t exactly laughing. An Air Force technical sergeant with the unfortunate name Don Henley registered his site – www.donhenley.com – only to be badgered by the like-named singer and his representation. ReelUniverse.com got a nasty note from Reel.com, which claims it has the right to any domain name containing “reel.” (There are currently about 20 such sites, from reeldeals.com to thereelsite.com.).

While such tales might encourage mail bombs or brick-through-window incidents, there are better ways of dealing with the injustices – and the web-wise have found them. Radio may have lost its fight against the balance sheet, but the Internet’s very structure will save it from the same fate. Only big money had access to big stations, but with the Web, it’s as easy to dial up www.podunk.com as it is Yahoo or Amazon. It doesn’t matter how rich you are or where you live – if you have a modem, you can create a popular Web site. Radio stations also fought over a finite number of frequencies, which is not an issue on the web. Businesses, non-profits and personal pages can co-exist without scrambling for space. And finally, if a corporation does get greedy and overstep its bounds, the Web is an ideal forum for a David-and-Goliath-style assault.

The media-savvy folks at etoy.com knew how to bend the power of public opinion to their advantage. Instead of mounting a counter-suit or whining to the government, the group took its case to the people – holding a press conference at New York’s Museum of Modern Art, e-mailing Etoys investors and alerting the online community. Together with now-renowned anti-corporate crusader RTMark (pronounced “art mark”), etoy organized a campaign that pummeled Etoys and drove down the toy company’s stock from an all-time high ($60 per share) to an all-time low ($20) in only two months. A virtual sit-in by the 1400-strong “toy army” crippled Etoys’ server by overloading it with requests (see www.toywar.com). Etoys’ bottom line, as well as their reputation, could not weather the storm. It finally offered to rescind the suit and pay all court costs – just in time for their earnings report.

Many are hesitant to call the etoy victory a rock-solid establishment of democracy in cyberspace, but it proved that in the court of popular opinion, justice is swift and costly. If groups like RTMark and etoy remain vigilant and refuse to be bought out (Etoys offered the etoy group $500,000 for their domain name and was turned away.), the Web could be the first truly egalitarian form of media.

All materials copyright 2019 by Kristin Fiore.