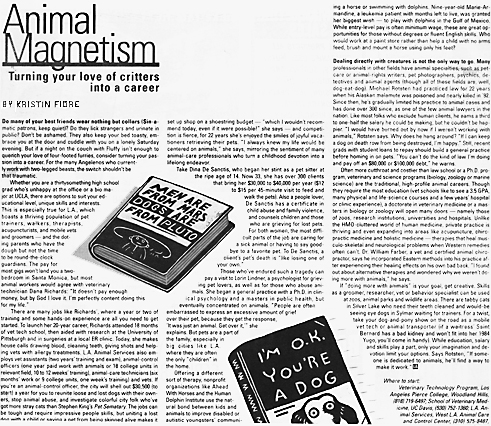 Do many of your best friends wear nothing but collars? Do they lick strangers and urinate in public? Don’t be ashamed. They also keep your bed toasty, embrace you at the door and cuddle with you on a lonely Saturday evening. But if a night on the couch with Fluffy isn’t enough to quench your love of four-footed furries, consider turning your passion into a career. For many Angelenos who currently work with two-legged beasts, the switch shouldn’t be that traumatic.

Whether you are a thirtysomething high school grad who’s unhappy at the office or a bio major at UCLA, there are options to suit your educational level, unique skills and interests. This is especially true for L.A., which boasts a thriving population of pet trainers, walkers, therapists, acupuncturists, and mobile vets and groomers – and the coting parents who have the dough but not the time to be round-the-clock guardians. The pay for most gigs won’t land you a two-bedroom in Santa Monica, but most animal workers would agree with veterinary technician Dana Richards: “It doesn’t pay enough money, but by God I love it. I’m perfectly content doing this for the rest of my life.”

There are many jobs like Richards, where a year or two of training and some hands-on experience are all you need to get started. To launch her 20-year career, Richards attended 18 months of vet tech school, then aided with research at the University of Pittsburgh and in surgeries at a local ER clinic. Today, she makes house calls drawing blood, cleaning teeth, giving shots and helping vets with allergy treatments. L.A. Animal Services also employs vet assistants (two years’ training and exam), animal-control officers (one year paid work with animals or 18 college units in relevant field, 10 to 12 weeks’ training), animal-care technicians (six months’ work or nine college units, one week’s training) and vets. If you’re an animal-control officer, the city will shell out $30,500 (to start) a year for you to reunite loose and lost dogs with their owners, stop animal abuse, and investigate colorful city folk who’ve got more stray cats than Stephen King’s Pet Semetary. The jobs can be tough and require impressive people skills, but uniting a lost dog with a child or saving a pet from being skinned alive makes it all worthwhile.

If you hate needles and your record bars you from government work, you can always do your own enterprising thang. Many animal fans make a living caring for others’ critters. High school grad Jennifer Perkins took night courses in finance, marketing and management, coupled them with years of breeding experience and research, and opened Holiday Pet Hotel in Encinitas. Though she set up shop on a shoestring budget – “which I wouldn’t recommend today, even if it were possible!” she says – and competition is fierce, for 22 years she’s enjoyed the smiles of joyful vacationers retrieving their pets. “I always knew my life would be centered on animals, “she says, mirroring the sentiment of many animal-care professionals who turn a childhood devotion into a lifelong endeavor.

Take Dina De Sanctis, who began her sting as a pet sitter at the ripe age of 14. Now 33, she has more than 300 clients that bring her $30,000 to $40,000 per year ($12 to $15 per 45-minute visit to feed and walk the pets). Also a people lover, De Sanctis has a certificate in child abuse and family violence, and counsels children and those who are grieving for lost pets. For both women, the most difficult parts of the job are caring for a sick animal or having to say goodbye to a favorite pet. To De Sanctis, a client’s pet’s deaths is “like losing one of your own.”

Those who’ve endured such a tragedy can pay a visit to lorin Linder, a psychologist for grieving pet lovers, as well as for those who abuse animals. She began a general practice with a Ph.D. in clinical psychology and a master’s in public health, but eventually concentrated on animals. “People are often embarrassed to express an excessive amount of grief over their pet, because they’ get the response, ‘It was just an animal. Get over it;” she explains. But pets are a part of the family, especially in big cities like L.A., where they are often the only “children” in the home. Offering a different sort of therapy, nonprofit organizations like Ahead With Horses and the Human Dolphin Institute use the natural bond between kids and animals to improve disabled or autistic youngsters’ communication and physical skills. Severely handicapped children at Ahead With Horses learn to hold their bodies up and balance while on a horse; some even learn to walk there. Both centers also help disadvantaged or terminally ill children who dream of riding a horse or swimming with dolphins. Nine-year-old Marie Armandine, a leukemia patient with months left to live, was granted her biggest wish – to play with dolphins in the Gulf of Mexico. While entry-level pay is often minimum wage, these are great opportunities for those without degrees of fluent English skills. Who would work at a paint store rather than help a child with no arms feed, brush and mount a horse using only his feet?

Dealing directly with creatures is not the only way to go. Many professionals in other fields have animal specialties, such as pet-care of animal-rights writers, pet photographers, psychics, detectives and animal agents (though all of these fields are, well, dog-eat-dog). Michael Rotsten had practiced law for 22 years when his Alaskan malamute was poisoned and nearly killed in ’92. Since then, he’s gradually limited his practice to animal cases and has done over 300 since, as one of the few animal lawyers in the nation. Like most folks who exclude human clients, he earns a third to one-half the salary he could be making, but he couldn’t be happier. “I would have burned out by now if I weren’t working with animals,” Rotsten says. Why does he hang around? “If I can keep a dog on death row from being destroyed, I’m happy.” Still, recent grads with student loans to repay should build a general practice before homing in on pets. “You can’t do the kind of law I’m doing and pay off an $80,000 or $100,000 debt,” he warns.

Often more cutthroat and costlier than law school or a Ph.D program, veterinary and science programs (biology, zoology or marine science) are the traditional, high-profile animal careers. Though they require the most education (vet schools like to see a 3.5 GPA, many physical and life-science courses and a few years’ hospital or clinic experience), a doctorate in veterinary medicine or a masters in biology or zoology will open many doors – namely those of zoos, research institutions, universities and hospitals. Unlike the HMO-cluttered world of human medicine, private practice is thriving and even expanding into areas like acupuncture, chiropractic medicine and holistic medicine – therapies that heal musculo-skeletal and neurological problems when Western remedies often can’t. Dr. William Farber, a vet and certified animal chiropractor, says he incorporated Eastern methods into his practice after experiencing their healing effects on his own bad back. “I found out about alternative therapies and wondered why we weren’t doing more with animals,” he says.

If “doing more with animals” is your goal, get creative. Skills as a groomer, researcher, vet or behavior specialist can be used at zooa, animal parks and wildlife areas. There are tabby cats in Silver Lake who need their teeth cleaned and would-be seeing eye dogs in Sylmar waiting for trainers. For a twist, take your dog-and-pony show on the road as a mobile vet tech or animal transporter (if a waitress’ Saint Bernard has a bad kidney and won’t fit into her 1984 Yugo, you’ll come in handy). While education, salary and skills play a part, only your imagination and devotion limit your options. Says Rotsten, “If someone is dedicated to animals, he’ll find a way to make it work.”

All materials copyright 2019 by Kristin Fiore.